How to Create & Publish a "Spotify Canvas" - 8 Second Catchy Loops

Over the last year you may have noticed short visuals looping on your Spotify Now Playing screen. This is what they’re calling the “Spotify Canvas” – the album artwork for the streaming age. For a while now they were exclusively available to major labels but recently Spotify announced that they were unlocking it for all artists. So if you haven’t already, you can get one now! 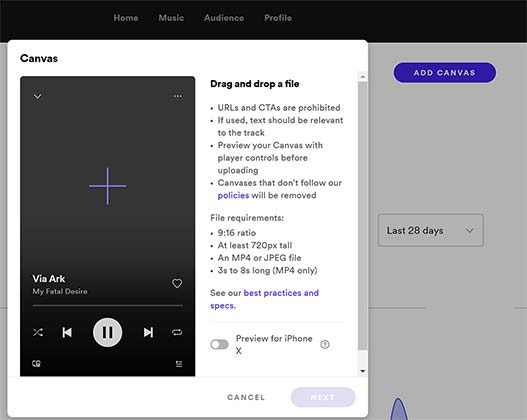 We’re happy to announce that we’ve now added “Spotify Canvas” as an extra to our lyric video production services. If you already have your Spotify Canvas, you can skip to the next step to see how you can publish it.

As for those who like to do it themselves, the basic setup and procedure of Spotify Canvas production is similar to our YouTube video rendering settings. The key difference is that we want to set the project up in a 9:16 vertical aspect ratio instead of a 16:9 horizontal one. Spotify guidelines recommend a minimum of 720p but we recommend going for 1080×1920 just to be on the safe side, as most mobile devices nowadays have a higher native resolution.

The duration has to be between 3 to 8 seconds. I do recommend using up all 8 of those precious seconds in order to make the loop more subtle. Especially if you’re going to be using about one of those seconds for a fade or glitch-type effect to blend in the loop & transition back to the start of the visual.

When it comes to text, Spotify says if used, they have to be relevant to the track. That means no links, call-to-action, hashtags or social media handles allowed. Bear in mind that Spotify Canvas is not about blatant self-promotion but building a branding. Think of it as more of a long-term investment in your artistic image. At a time when where we’re bombarded with clickbaits and hashtags all day long, I think it was a really good move to dedicate these 8 seconds entirely to art.

Now that you have created your Spotify Canvas, head on over to your Spotify for Artist account and navigate to the music tab. If you don’t have an account, then we strongly suggest getting one. It gives you the option to customize your artist page on Spotify and take advantage of the numerous tools Spotify provides including today’s focus, the Spotify Canvas.

Once you’re on the music tab, find the song you’d like to add the canvas to and click on it. If the song is not yet released, you can find it under the “upcoming” tab. On the top right corner you should now see the newly featured “Add Canvas” button. Once opened, you’ll have the option to upload and preview your Spotify Canvas. Make sure it looks good then click next and publish it. In our experience it should be live within a few minutes.

Though this guide is written with the web in mind, the procedure for publishing a Spotify Canvas is exactly the same through the Spotify for Artists mobile app.

We mentioned earlier that the Spotify Canvas is not a direct marketing tool and should not be used for self-promotion. At least not in an obvious way. That said, Spotify does make some interesting claims about tracks that have Canvas added. On a site they dedicated to Spotify Canvas, they advertise that tracks with canvas are 5% more likely to keep playing vs. control group, 20% more likely to be added to a playlist, 9% more likely to lead to a visit the artist’s page, 1.4% more likely to be saved to the listerner’s library, and perhaps most impressively, a whopping 145% more likely for the song to be shared.

Speaking of sharing, another great advantage for Spotify Canvas is that the tracks that have one will display the canvas instead of a static artwork image when shared to instagram stories.

Considering how difficult it can be to reach new listeners, doubling the shares of your next release can be a game changer for artists. This is further supported by artists who are willing to give Spotify a payout cut, or even place Facebook Ads for promoting music. And although we think those numbers will probably decline once the new feature charm wears off, but we still strongly recommend getting a Spotify Canvas for your releases.