What is a Lyric Video? Is Getting 1 Better Than a Music Video?

With lyric videos flooding YouTube for the last decade, I’ve heard many artists ask if there’s still a point in going through the hassle of a music video. Or even what is a lyric video to beging with? YouTube is one of the biggest platforms for music streaming and discovery, so you have to get your music on there. That said, in this post we’ll explore the pros and cons of both options and hopefully you can make more informed decisions for your next release.

The primary advantage music videos offer is that they can showcase the artist. People are social animals and they respond to seeing other people. That is even more true when it’s about fans seeing their favorite artist. So if you’re trying to market a certain image, or appeal to a certain demographic, it might be best achieved through filming a music video. They do however come at a premium. A music video can cost on average around ten times more than a lyric video.

What is a Lyric Video?

Everyone knows and understands the concept of a music video, but given their relative recent surge in popularity, it makes sense to ask what is a lyric video and when would they be preferred over a music video.

Well, if you want to visually portray the message of your song, then lyric videos will come out on top. You can always include an image of the artist in the lyric video to help with the branding too (similar to the video we did for Corey Kelly). Lyric videos are not only more budget-friendly to produce, they can even be free. If you have a laptop and basic knowledge of a few key apps, you can make your first lyric video in a day or two, so long as you’re okay with something relatively basic (but still far better looking than a video done in Movie Maker).

If you don’t want to pick between the two, then you may not have to! If your budget allows it, you may be able to get the best of both worlds by first producing a music video and then adding the lyrics over it. You may have to hire two separate entities for this; a director to shoot and edit the video, and an animator to implement the lyrics into said video.

We did the lyric video animation part of this technique for The Rasmus and Regi. If you do opt for this method, I would highly recommend having the lyrics placement in mind when shooting and editing the music video footage. Doing this ensures the lyrics to blend right into the video and not look like a mere afterthought.

Which One Gets More Views?

Last year while talking to one of my record label clients, I was surprised to learn that their lyric videos are getting more views than their music videos. I was skeptical at first but have to admit these guys are pretty data driven. We can also compare songs that have both types of vdeo.

To use an example from my own work, the lyric video I made for Smith & Thell, has over 3 million views as of writing this post. Whereas its (very cool looking) music video counterpart has nearly ten times less. Obviously there’s way too many factors to consider when drawing a comparison like that, so you can make of that what you will. 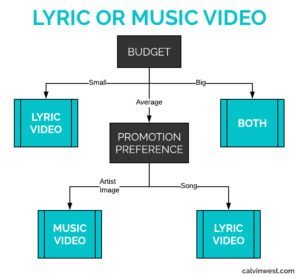 So Which One Do I Get?

In very broad terms, think of a music video as a way to promote an artist or an image, and a lyric video as a way to promote a song or a release. If cost is a limiting factor, then a lyric video will almost certainly give you more bang for the buck. If cost isn’t an issue however, consider getting both or a fusion. When in doubt, refer to our handy flowchart!